Yogyakarta, together with its twin city Surakarta (Solo), is the cradle of civilization on Java. This city was the seat of power that produced the magnificent temples of Borobudur and Prambanan in the 8th and 9th century and the new powerful Mataram kingdom of the 16th and 17th century.
Yogyakarta was known with the slogan of “Jogja The Never ending Asia“ for its endless appeals. Today, it is also renowned as “ Jogja Istimewa “, a tagline that elaborates its special values.

This city is one of the foremost cultural centers of Indonesia. From strolling through the living museum of The Kraton or The Keraton (Sultan’s Palace), to hanging out at the famous Alun Alun, to watching silversmiths produce amazing jewelry at Kotagede and maybe try a splurge shopping up at Malioboro road.
Chasing sunrise in famous temples like Prambanan and Borobudur in the neighboring town of Magelang, are only some of the many more ways to never get bored in this relatively small yet bustling city.

You can experience all five wonders in this artsy city. Starting from indulging in the natural wonders, by visiting scenic beaches and photogenic landscape. Parangtritis, Indrayanti, Pok Tunggal, Siung, Krakal, and Jogan are some of the famous beaches in town.
Breathtaking points such as Puncak Becici, Pinus Pengger, and Jurang Tembelan are only several of plenty more exciting back-to-nature destination in Yogyakarta!

For culinary wonders, don’t forget to try the Gudeg first, a special cooking of traditional Javanese recipe that is iconic to this city. The Bakpia, is a traditional snack with many enticing flavors that are popular for souvenirs. For a beverage, you can try the Jamu, a natural herb mix beverage based on ancient tradition used for natural remedies.

Batik is the national treasure based on Javanese word of “amba” and “titik”, meaning to write the dots. It is an art of decorating fabric using wax and dyeing process. Yogyakarta has a signature batik pattern that are usually made with a bright white basic. Some of the motifs are namely The Parang Kusumo, Kawung and Truntum, each was created with the special philosophy behind its every dots.

There are Batik Tulis, Batik Cap, Batik Print and the mixed result of the techniques. The most expensive is the Batik Tulis, which are made of 100% hand paint ornaments. It will become even more expensive if it is made from precious silk fabric. Making a fine quality Batik Tulis can range from a day of production to a meticulous months-long process, depend on the size and sheer complicated details of the design.

Wayang is also an amazing art heritage known from Yogyakarta. There are the Wayang Kulit or leather puppet, played on a shadow puppet show by the dalang or puppet master through a screen lit by lights. Wayang Orang is the life-size performances depicting the same philosophical messages from ancient stories and is presented by men and women in elaborate traditional costume.

You can discover the Recreation wonders, by visiting the tourism villages in Yogyakarta. Tembi, Pentingsari, and Nglanggeran are three of the places that you can start with. Experience the authentic daily life of the locals, and learn some new skills, such as playing the gamelan, weaving janur and perform a Javanese traditional dance!

Rock climbing can be done in Siung beach, while cave tubing is a major attraction in Goa Pindul, and you can try to visit Jomblang cave for an extraordinary caving experience.

Yogyakarta is indeed a city with numerous attractions to enjoy. All of this and many more to explore has brought Yogyakarta as the second most visited destination in Indonesia after Bali.

By Air
There are plenty of daily flights from Jakarta, Surabaya, and Bali to Yogyakarta’s Adisucipto International Airport.

Overland
There is a regular train service between Yogyakarta and other neighboring major cities. Yogyakarta is also easily accessible by road in cars or public overland bus services.

Once you arrive, there are a number of ways you can explore Yogyakarta. Walking is a great way to take in the sights and meet the locals though it can get hot by the middle of the day. Strolling the heart of the city and find the many attraction located nearby the Malioboro area.

Embrace the local mode of transport and try a becak, traditional three wheeled pedal powered cart. Remember to negotiate the price before you start on your journey.

Traditional horse-drawn carts known as Andong can be found in the tourist areas of Yogyakarta. These are a relaxed and romantic way to take in the sights.

You may wish to organize a car and driver for the duration of your stay in Yogyakarta.

If you know how to ride a motorbike you can hire one in the city. Taxis are available and can be arranged through your hotel. Buses are the major form of public transportation here, however, their hours of operation and capacity can be limited.

Try to enjoy some part in the rural side with a bicycle ride, and discover beautiful corners that can inspire you to fall more in love with the special charm of Yogyakarta!

The nearby cities that you can also visit from Yogyakarta are Magelang and Solo. Make your way to Punthuk Setumbu and see the elegance of Borobudur temple from a different viewpoint at sunrise. Solo or also known as Surakarta, has its very own charming palace and famous for its natural wonders, such as Grojogan Sewu Waterfalls. 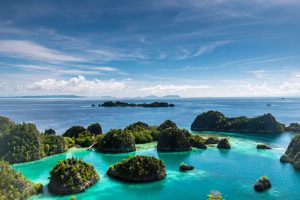 Far from the view-blocking skyscrapers, dense and hectic concrete jungles, congested traffics, flickering electric billboards, endless annoying noises, and all the nuisances of modern cities, you will find a pristine paradise where Mother Nature and warm friendly people welcome you with all the exceptional wonders in Raja Ampat, the islands-regency in West Papua Province. 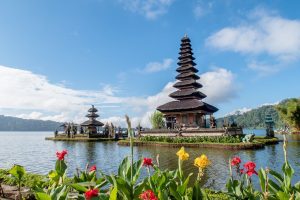 Also known as the Land of the Gods, Bali appeals through its sheer natural beauty of looming volcanoes and lush terraced rice fields that exude peace and serenity. It is also famous for surfers’ paradise!